Errol Morris’s most recent documentary is about the horrors that happened in Abu Ghraib prison during the Iraq war. It doesn’t pull any punches. It made me squirm and hold my hand over my mouth in shock. Morris simply allows the soldiers involved to tell their story in a surprisingly candid manner. Their story stems from being stationed at Abu Ghraib as military prison guards and taking pictures of themselves posing with prisoners they were humiliating, beating, or had recently been killed. The soldiers forced prisoners to strip naked, put underwear over their faces, handcuffed them to prison bars in stretched positions, and made them do sexually humiliating poses. The most famous picture is the one below, with female prison guard Lynndie England holding a leash tied around a naked Iraqi man’s neck: 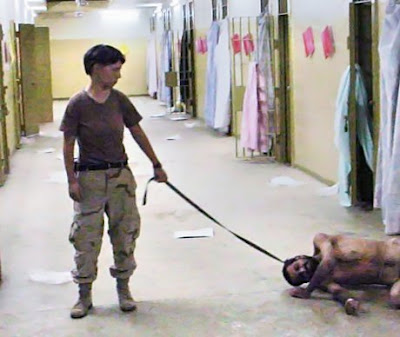 It’s difficult to make a film about the Iraq war that doesn’t come across as overly political or preachy (though Kathryn Bigelow’s masterpiece The Hurt Locker is about as apolitical as films come). Standard Operating Procedure digs deep into one of the worst aspects of the war: Americans torturing people. The soldiers involved are all quite honest about their experience, including their participation in the photographs and the humiliation of prisoners. It raises the question, what would cause a person to do this to another person? It sounds like the conditions were perfect to degrade into an order a la Lord of the Flies. The soldiers were very young and inexperienced (Lynndie England was only 20); the prison was constantly under attack by mortars and gun shots, putting anyone on edge; the Iraqi prison guards weren’t trustworthy and smuggled weapons to the prisoners; many of the prisoners had harmed or killed American soldiers; and perhaps the most chilling, the soldiers were given orders to do some of the horrible things they did. Prisoners being interrogated in the nude seems to have been the norm. All of these factors likely play a role. If a young inexperienced soldier was put in these kinds of conditions, the pressure and stress would make anyone crack.

Rather than elicit a political response in me–i.e. the Iraq war is a terrible thing–I was gripped with the atrocities of sin. Perhaps the most alarming part of the interviews is the sincere lack of emotion or regret from any of the soldiers directly involved. They even smirk or laugh when recalling certain events, like they’re remembering a fun weekend with friends. They don’t seem to regret their actions–Lynndie even admits as much–but only regret that the photos were released. It’s like a child who is upset not about their wrongdoing, but about getting caught. One particular soldier didn’t even seem to understand why she was punished. She claims she was just taking the photos, that she wasn’t really doing anything. It’s a sin of omission, of not standing up for what is right even when you know you should.

Standard Operating Procedure is not for the faint of heart. The pictures the soldiers took are quite graphic, including a lot of male nudity and blood, and the soldiers are pretty foul-mouthed at times. Yet Morris has done a fantastic job of capturing the story of Abu Ghraib with clarity, candor, and a sense of urgency. He is a phenomenal documentary filmmaker, and I’m eager to see his other films. Morris wants us to know that this should have never happened. Let’s hope it never happens again.