For Transpositions, I recently wrote on Garth Davis’ 2018 film Mary Magdalene, the #MeToo movement, and the filmic depictions of Mary Magdalene throughout cinematic history:

I find it sadly ironic that Garth Davis’s exquisite 2018 film Mary Magdalene became an unexpected victim in the #MeToo movement which emerged following the New York Times article on movie producer Harvey Weinstein’s purported long history of sexual harassment and abuse. Set to be distributed by The Weinstein Company for Easter 2018, the film was subsequently shelved for release in the US following the company’s bankruptcy. Thankfully, I was able to see it during its one-week run in the local cinema in St Andrews.

A disappointed Davis said in an interview in March 2018, ‘Our film celebrates everything that is the antithesis of what’s happened [with Weinstein] … So my main focus is just to celebrate Mary and get her story out into the world. That’s my absolute mission’. Starring Rooney Mara as Mary and Joaquin Phoenix as Jesus, Mary Magdalene is a fresh, affecting cinematic view on the apostle to the apostles. Her tarnished reputation throughout church history thus finds a parallel in Magdalene’s filmic portrayals within the subgenre of Jesus films. 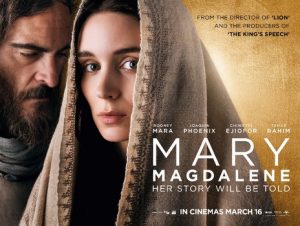 What do we actually know about Mary Magdalene? In her book, Mary Magdalen: Myth and Metaphor, Susan Haskins notes the following four aspects that we know for certain from the four Gospel accounts: ‘that Mary Magdalen was one of Christ’s female followers, was present at his crucifixion, was a witness – indeed, according to the gospel of St John, the witness – of his resurrection, and was the first to be charged with the supreme ministry, that of proclaiming the Christian message’. Yet following a sixth-century (mis)interpretation from Pope Gregory I conflating her with the anonymous woman of ‘sinful repute’ in Luke 7, Mary Magdalene has been commonly portrayed as a lusty demon-possessed prostitute, a woman known more for her sin than her sanctification.

Read the rest here at Transpositions.